In the winter of 1944 to 1945, the Dutch experienced a horrific famine in the German occupied parts of the country that would come to be known as Hongerwinter (“Hunger Winter”).  By February 1945, the adult rations in the west consisted of about 580 kilocalories per day, and by the end, more than 22,000 people had died.

As you might imagine, this also affected the health of the people who suffered through it but survived.  The children of women who were pregnant at the time were lighter and shorter than those whose mothers had not suffered through the famine; however, what was unexpected was that the children of those children, the grandchildren of the women who lived through the famine, experienced poorer health in later life.  How can this be if their own mothers had a healthy food intake during pregnancy?  The answer may be found in a relatively new field of genetics: epigenetics.

So we all remember the basics of DNA (maybe?).  A double helix composed of amino acids (A,T,G,C) attached to a sugar and phosphate backbone that contains all your genes.

You use these genes as blueprints that tell your body how to make the proteins that are essential to life.  If you think about your DNA as a giant library, each gene would be one book with a set of instructions on how to make a specific protein.  But all these books take up space.  If you put each book on the floor one next to the other, you’d need an unreasonable amount of space to store them all.  We need a more efficient storage mechanism.  The solution is that the books are stacked and each stack is placed very close to the next, but at the cost of not having all books readily available for reading at all times.  In the Berkeley Library, we had the stacks of books pushed together with no space between the stacks to walk in and get to the books.  If you needed a specific book, you’d have to turn a crank at the end of the stack to make enough space between them to walk in and access the desired book.

DNA organization has a similar concept.  Each cell contains 1.8 meters of DNA, but when wound up into a structure called chromatin, it is only .09mm!  The DNA is wound around proteins called histones (cream colored blobs in picture below) like yarn wrapped around a ball.  When the DNA needs to be accessed to make a protein, the structure has to be unwound so the specific DNA sequence can be read. 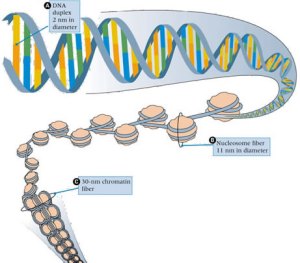 We also have a process called  methylation which adds a methyl group to DNA.  I like to think about this as a sort of annotation system the body keeps to remember which genes to express or not, a sort of bright red sticky note that marks the books and pages that are particularly important or blocks off those that are not so important.  Methylation helps the cell keep track of which genes to express and which ones are ok to be inaccessible in storage.

So how does this relate back to our story of the famine?  How can a woman’s health be affected by her grandmother experiencing hardship?

Histones and methyl groups are important in determining how the DNA gets used and which proteins are made in each cell, aka, how the genes are expressed.  These annotations can be transferred when cells divide, replicating the evidence of the environment an individual has experienced.  This reveals a potential explanation for the grandchildren’s poorer health outcomes.  Experiencing the famine may have changed the way the DNA was annotated and this information could have been passed on to future generations.

This is epigenetics: the study of changes in gene expression by environmental triggers that add (or remove) labels on DNA.  The DNA sequence is not changing; how the genes are expressed is.  This is a fascinating new avenue of study that will help inform us in combating diseases such as cancer and schizophrenia, and may even help us put to rest the old question of nature vs. nurture!